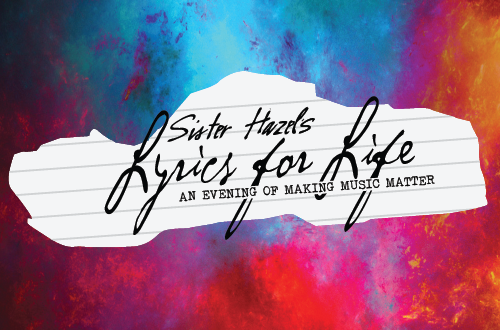 Lyrics for Life: An Evening of Making Music Matter

Concert Ticket Holders will have reserved seating in the Balcony and Mezzanine. Guests

will have access to a Cash Bar serving Beer, Wine and a Signature Cocktail. The Cash Bar

will begin one hour prior to the show and will be available throughout the show. Guest entry

will be through the East Staircase to the Phillips Center. Doors open for Concert Ticket Holders at

BlueWater Bay. Gala Ticket holders will also have access to the “After Party” with a hosted

bar, dancing, and desserts. Guest entry will be through the main entrance to the Phillips Center.

Doors open for the Gala Ticket Holders at 7:00pm.

Sponsors and their guests will have prime reserved seating on the main floor. Ticket

catered by BlueWater Bay. Sponsors and their guests will also have access to the “After

Party” with a hosted bar, dancing, and desserts. Doors open for Sponsors and their guests

at 6:00pm. Entry will be through the main entrance to the Phillips Center.

younger brother Jeffrey, who ultimately lost his four-year battle with Cancer when he was

The charity unites musicians and celebrities for concert events, auctions and other

fundraising efforts. The monies raised are donated to groups that are working to find a cure

as well as those aiming to enrich the lives of patients and their families. From research to

summer camps and family support groups, we are surrounding this disease and conquering

it from every angle.

Artists participate in many ways, most often by donating handwritten lyrics to one of their

songs on anything from a simple sheet of paper, to a surfboard to any kind of unique item.

Our team of musicians, volunteers, sponsors and supporters are proud to set our goals for

the future high. We accept the challenge of finding new ways to raise money, awareness

and sensitivity, to help make each day a little brighter until there is a cure.

Influential Independent Performers of the last 15 years” by Performing Songwriter

Magazine. Song “All for You” topped the adult alternative charts during the summer of 1997

and the success propelled their album to platinum status.

Volumes I, II, III, and IV of a clever EP compilation series titled “Elements.” In February

landed at on the charts at #15 on Billboard’s Americana/Folk Album chart.

Living up to their fan-centered reputation, the band hosts annual events like “Hazelnut

Hang,” that focuses on fan involvement and was a pioneer in themed cruise experiences by

interaction. Sister Hazel has been equally attentive to connecting with their audience

through social media. They have since made their Grand Ole Opry debut and shared the

stages with country music superstars at The CMA Festival, Tortuga Music Festival, among

others. In addition to the events and touring, the band also gives back with “Lyrics For Life.”

Founded by singer Ken Block and the Band, the charity unites musicians and celebrities for

concerts and auctions to benefit cancer research and patient-care charities.

Than Ezra, and Emerson Hart of Tonic. Together, the members of Ezra Ray Hart have sold

over 20 million albums in the US and have 18 top ten hit singles on the US charts, including

five number one hits. With all of this talent together on stage, this supergroup is a

and several multi-platinum albums as the lead singer and songwriter for Sugar Ray. With his

had never heard before. He went on to land hit singles “When It’s Over,” “Someday,” and

another number one smash hit with “Every Morning.”

Kevin Griffin of Better Than Ezra

Known as the lead singer and guitarist for alternative rock band Better Than Ezra, Kevin

Griffin has released 8 studio albums including platinum album, Deluxe. With his number one

hit “Good” and top 10 hits including “A Lifetime” and “Juicy,” Griffin brings an energy like no

other with his unfailing falsetto and love for inviting audience members on stage. Other

Better than Ezra hits include “Desperately Wanting” and “Extra Ordinary.” Kevin has had #1

Perri, James Blunt and Train just to name a few.

The lead singer and songwriter of the alternative rock band Tonic, Emerson Hart, has

achieved multi-platinum success with hit songs “Open Up Your Eyes,” “Take Me As I Am,”

and “If You Could Only See.” With Tonic’s six top 10 singles, 4 million records sold, multiple

Grammy nominations, and multiple platinum albums, Hart is a musical force that captivates