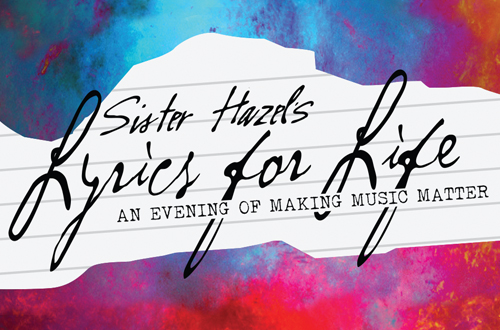 About Lyrics for Life:

​​”Lyrics For Life” was founded by Sister Hazel’s front man Ken Block in memory of his younger brother Jeffrey, who ultimately lost his four-year battle with Cancer when he was only 18 years old.

The charity unites musicians and celebrities for concert events, auctions and other fundraising efforts. The monies raised are donated to groups that are working to find a cure as well as those aiming to enrich the lives of patients and their families. From research to summer camps and family support groups, we are surrounding this disease and conquering it from every angle.

Artists participate in many ways, most often by donating handwritten lyrics to one of their songs on anything from a simple sheet of paper, to a surfboard to any kind of unique item. We then frame or mount it beautifully and offer it for sale in one of our Lyrics For Life auctions.

Our team of musicians, volunteers, sponsors and supporters are proud to set our goals for the future high. We accept the challenge of finding new ways to raise money, awareness and sensitivity, to help make each day a little brighter until there is a cure.

Originating from Gainesville, FL, Sister Hazel is comprised of five gifted, seasoned musicians whose well-spring of natural talent has been called “one of the Top 100 Most Influential Independent Performers of the last 15 years” by Performing Songwriter Magazine. Song “All for You” topped the adult alternative charts during the summer of 1997 and the success propelled their album to platinum status.

Living up to their fan-centered reputation, the band hosts annual events like “Hazelnut Hang,” that focuses on fan involvement and was a pioneer in themed cruise experiences by co-founding “The Rock Boat,” a cruise featuring nonstop opportunities for fan/artist interaction. Sister Hazel has been equally attentive to connecting with their audience through social media. They have since made their Grand Ole Opry debut and shared the stages with country music superstars at The ​CMA Festival, Tortuga Music Festival, among others. In addition to the events and touring, the band also gives back with “Lyrics For Life.” Founded by singer Ken Block and the Band, the charity unites musicians and celebrities for concerts and auctions to benefit cancer research and patient-care charities.

Darius Rucker first achieved multi-Platinum status in the music industry as lead singer and rhythm guitarist of the GRAMMY Award-winning band Hootie & the Blowfish, who have sold more than 25 million albums worldwide including their Diamond-certified debut Cracked Rear View, which remains among the Top 10 best-selling studio albums of all time. Since releasing his first Country album in 2008, Rucker has earned a whole new legion of fans with four No. 1 albums on the Billboard Country chart, including RIAA Platinum-certified Learn to Live and True Believers, plus 10 No. 1 singles at Country radio and 11 Gold, Platinum or multi-Platinum certified hits. Rucker was inducted as a Grand Ole Opry member in 2012 and in 2014 he won his third career GRAMMY Award for Best Solo Country Performance with his 9x Platinum version of Old Crow Medicine Show’s “Wagon Wheel,” one of the top five best-selling Country songs of all time. He co-hosted the 54th annual CMA Awards in 2020 and topped the charts at Country radio once again with “Beers And Sunshine” in 2021. Follow up single “My Masterpiece” is available everywhere now as Rucker puts the finishing touches on a forthcoming album.